At the turn of the 1970s and 1980s, when the salted chicken recipe arrived in what was then Czechoslovakia, perhaps no one cooked it differently for a while. Over time, however, this classic procedure was forgotten, and today many do not know what salted chicken actually is and what it tastes like. Go back in time and let yourself be enchanted by the taste that almost every Czechoslovak praised to the heavens 40 years ago. Baking chicken in salt is ridiculously easy.

During the time of socialism, people did not have access to exotic raw materials, so they had to work with what was available to them. From time to time, some had the desire to experiment with food, but the options were limited. This is probably the reason why a very unconventional salted chicken recipe was born at that time. Basically, it’s incredibly simple. Just pour one kilogram of salt into a baking dish, spread it out and then put the whole chicken in the salt. The procedure became very popular almost immediately. Chicken cooked this way is beautifully juicy, just salty and, according to many, tastes just like fire-roasted chicken.


Salted chicken tastes like it was grilled.
Source: Shutterstock

How to bake chicken in salt

Although roasting chicken is very easy, there are a few guidelines to follow. Despite the simplicity of the recipe, it is possible to encounter several problems. The most important thing is that even after a relatively long time that the meat spends in the oven, it may not be completely cooked. In many recipes, the chicken is baked at 200 degrees Celsius for about an hour and a half. After this time, it has a beautiful color and looks perfectly baked. But when you’re working with a larger chicken, it’s entirely possible that it will be nicely golden on the outside but still raw on the inside. It is better to buy meat of about 1000 grams, and bake the chicken only at 180 °C. The whole process then takes a few tens of minutes longer, but the result is definitely much more satisfying.

Oven-baked chicken thighs. Simple, but they are not wrong

Another thing to mention is the absence of any juicing or roasting. Salt-baked chicken is juicy, but because of the salt it sits on in the oven, there is absolutely no juice left in the baking dish after baking to pour over the chicken on your plate. So it is definitely worth preparing homemade salsa or mayonnaise for meat. 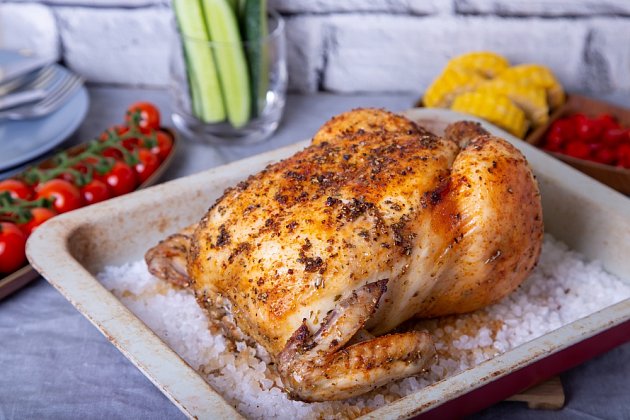 Pour one kilogram of salt into the baking dish and spread it on the bottom. Place the pan with the salt in the oven heated to 220 degrees and let the salt heat up for about 10-15 minutes. Meanwhile, clean and rinse the chicken and pat dry with a paper towel. Lightly salt the inside and tie the thighs with kitchen string. Then put it in hot salt and reduce the temperature in the oven to 180 degrees. Then leave the chicken to roast without any intervention for about 120 minutes. After roasting, we cut it in the breast area to make sure it is cooked properly.

Asian noodles with chicken and vegetables like from a restaurant

When the chicken is done, remove it from the oven and remove the skin from the salt. Due to its extremely salty taste, it is inedible. Meat is served with, for example, rice, boiled potatoes or vegetable salad. Salsa or barbecue sauce complements it perfectly on the plate.